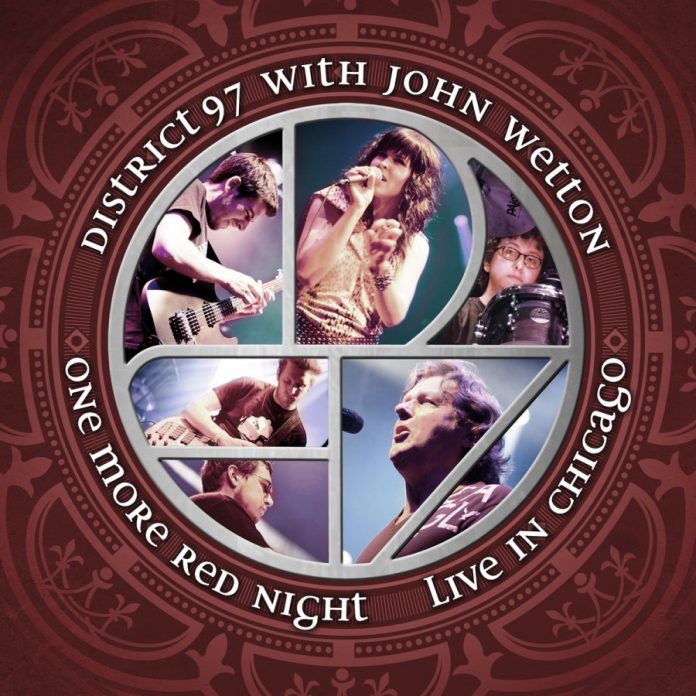 So I asked myself. I said Self:

Of course, the answer was just a Google search away. Seems they are a fresh modern-day prog-rock band from the U.S.A. with a female lead singer who was a Top Ten finalist on 2007’s American Idol. I only watched AI one year, and that wasn’t it. She ended up losing, but got priceless exposure in the process. The lady’s name is Leslie Hunt. Before her, District 97 was an instrumental band that is said to have played like the prog-rock band, Liquid Tension Experiment. Serious musicians, in which now I can connect to one of the coolest bass players walking the planet. I’m starting to learn how to play the bass myself due to Mr. John Wetton. Also a songwriter, and a vocalist that has no problem rocking down the house. His singing abilities, as strong a voice as that of any twenty-year-old. I say this because when this particular live recording was done, the man was 65 years young. Note, I saw John perform live twice so far. Once with Grammy-nominated Asia, and another time with his own band at ProgFest ’97 (California). I know what he is capable of, and wasn’t let down at either of the performances I saw.

I first heard of King Crimson reading the rock n’ roll magazines of the 1970s in my youth on the Jersey Shore. Frankly, very few of my friends dug them. Not that they sucked, but said to be an acquired taste. Art Rock in full bloom. Being a Yes fan, my interest was who was behind the drum kit with that being former original Yes member/drummer extraordinaire, Bill Bruford. So I initially listened to King Crimson because of Bill. The band in all its incarnations since, with both Bill Bruford and John Wetton involved or not, for those who don’t know, King Crimson is a vehicle for its main guitarist/songwriter, Robert Fripp. Oh…and heads up, for the mighty King Crimson has seen some activity of late. As also did John Wetton, who takes center square with his and District 97’s performance of classic seventies King Crimson songs.

Whoever included at the time, for King Crimson centers around in every reincarnation, a man Bill Gates thinks is a top-notch guitar player; Mr. Robert Fripp. A wonderful musician and songwriter, for it’s worth mentioning that Mr. Fripp’s name is mentioned in the songwriting credits, with EVERY song performed on this very well performed and recorded live, new release.

Nine songs and over forty minutes of classic King Crimson music performed on a HOT Chicago Night. John Wetton, not playing bass, for his backing band is District 97 and their bass player is more than capable (Patrick Mulcahy) which I imagine frees up thought and enables John to focus on his vocals, giving an incredible performance throughout. Music is performed flawlessly. Not really just a cover of older songs, for it showcases an important part of the classic King Crimson sound, with that being Mister Wetton. For those keeping score, this recording includes two songs from Larks’ Tongues In Aspic, three from Starless And Bible Black, three from Red, and a King Crimson song from In The Court Of The Crimson King that John made his own when performing, ’21st Century Schizoid Man’.

Rating: Using the five-star system where one star means it sucks, to five stars meaning it’s worth spending your hard-earned cash on, yours truly rates District 97 With John Wetton – One More Red Night (Live In Chicago) – 5 stars!

Repeated plays since receiving it. A welcome addition to my King Crimson / King Crimson Related Collection (yes I have one). All fans of early King Crimson, District 97, and supporters of John Wetton, in my opinion, NEED to have this recording. A lucky bunch of people who actually got to witness the show/tour live. With this recording, you’ll blow many minds, including your own. If coming out of the speakers, others could hear as well, and then in the process, you’ll be turning others on who might not be aware of these gems.

To John Wetton, and the incredibly talented District 97 band; a wonderful recreation of a very cool batch of songs.