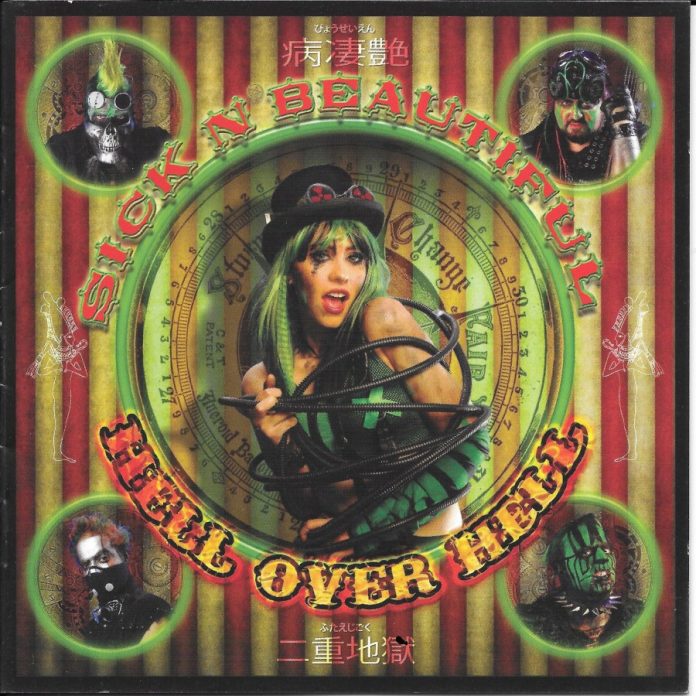 Not sure how it all exactly started. One day I was unaware of them, and the next day I was consumed. WTF happened to me? I need to chill out for a minute. Gather my thoughts. A little herbal therapy. A rather large piece of a lemon meringue pie. I’m starting to remember details such as where I last saw my car keys? A good beginning.

How did a circus of nomads from another galaxy, end up in Rome, Italy, become recording artists, and most importantly, how their debut release called ‘Hell Over Hell’, end up in my home CD player? Results are I dig songs individually, yet I play the disc from start to finish for the full experience. For I don’t wanna miss anything. The disc knows this, and I swear it has a mind of its own. This is not a run-of-the-mill rock n’ roll album. For example, after I play the CD, it stops spinning and just hangs out in the tray. Not moving. Then a powerful sensation from within and the idea of pressing the play button again enters the mind. Either some kind of alien magick or a natural response to what I just heard?

Uncle G’s Inside Voice: “It’s the woman I’m telling you. She has powers. The four males she’s with who look like extras from a Predator movie, interact with her, like a well-oiled machine. Gee…I wonder if there is more lemon meringue pie in the fridge. Let’s get up and go see.”

Little by little my more memories are coming back. Revelations! Such as, I sucked playing baseball as a kid. But I had a good time playing it all the same.

The female who mostly speaks for the others, her name is Herma. A master of vocal communication. A seemingly trained voice, or natural talent capable of singing, and emitting sounds that captivate all that is within earshot. Add to this she’s extremely intelligent, and good-looking, which means there is potential for her being dangerous. Once a human being’s eyes and ears are open to her…once she’s mingling with your inner consciousness, Herma makes herself at home, deep in your brain. I sense the aliens’ intention is to never leave.

The four men Herma are with, each seems to have their own special skills/talent. So I learned, the main focus of this group appears to be trying to get their spaceship, something they call the BFS 9000, to fly again. Good luck with that. Recent word on Facebook is the ship was totally destroyed, beyond any hope of ever being functional again. So besides being make-shift mechanics, trying to help, the only one they really have, a Mr. PK, each man is also what we here on Earth label; musicians. This is obvious from various reports of them playing in concert, out in the open, at various locations.

Not immediate fans of our planet, nevertheless Herma and the guys do seem to be assimilating. Respecting the ways of the land. The five of them when grouped together and making music, refer to themselves collectively as the; Sick N’ Beautiful. And get a load of this…Kiss fans I think. Could be what drew these outer space circus nomads here, to begin with? Or maybe Herma’s skills as a pilot aren’t as good as she likes to think they are? How Kiss’ music reached LV-426 ‘Acheron’, the home planet of Sick N’ Beautiful, I’ll never know. On the Internet are video reports of Sick N’ Beautiful covering of all things, the disco hit Kiss done back in 1979 called; I Was Made For Loving You. The band metals it up some, making the song their own. A vast improvement over the original if you ask me. Or maybe they learned the tune after getting stuck here?

Other Intel: It seems that someone by the name of Ray Sperlonga has been named responsible for coming to the aid of this galactic group of freaks/misfits. Music, and lyrics (I imagine interpreted thoughts and ideas from the space travelers). Produced and recorded by Ray also. He’s not the only one. Talented photographers, are helping them. Humans who work at Rosary Lane in Rome. Whoever needed to make an almost one-hour-long CD with sixteen tracks, and then help Sick N’ Beautiful bring it all to life, be it on stage or on film. All those behind the scenes doing social media — PEOPLE ARE STARTING TO TAKE NOTICE. Give aid to them more and more. Ristorante Cinese Fantastico feeds Sick N’ Beautiful anytime, even in the late hours of the evening. Meanwhile, the good Country of Italy just closes its eyes and is letting it all happen. No plans or action is taken to contain Sick N’ Beautiful whatsoever. I conclude their musical communications has been purposely let out, being distributed all over the World. Proof, I’m all the way across the Atlantic Ocean, and then some. Word got to me, much like now and how it’s getting to you.

I REMEMBER: I got a package one mid-day. Delivered to my home, containing PROOF of a UFO that crashed and of its crew, just weeks ago. Opening the bubble envelope, I found a music CD inside. The plastic case cracked from the thousands of miles it traveled. The disc was intact. So I played it. Immediately I became mesmerized and intrigued. I maybe should be frightened, but instead, I’m drawn. And then I remembered nothing, and now I have a flood of memories. Better yet, conclusions after immersing myself totally in this story.

For one, the realization has come that Sick N’ Beautiful will NEVER LEAVE Earth. Why should they go? Word is us humans, and this blue mess we call home, amuse them more and more every day. Their numbers of followers grow daily. My report when published I’m afraid will attract more than repel. I think to myself. I say; “Self, there is nothing here regarding Sick N’ Beautiful so to have to chase people away. Nothing to fear. Always good to be somewhat cautious, especially when visitors from outer space are concerned. Us Earthlings trading money and sex in exchange for rock n’ roll music is not a new concept. My report to the President will cut to the chase. No harm, no foul. My job’s to alert, present what I know, and let you (the reader) take it from there. Shall we carry on?

(Get the wrench out of his hand and let Mr. PK give us a drum roll please)

Uncle G gives the Sick N’ Beautiful debut album – Hell Over Hell – 5 stars! I was hooked when first hearing the introduction track; March Of The Scolopendra. Sets the scene wonderfully. This leads to the band’s second single; Sick To The Bone. Could be my favorite tune? Then the futuristic group’s first single, the metal monster; New Witch 666. Next, I was fixated with the last two tracks; Pots, Pans, And Empty Green Meth Cans (should be nominated for best song title of the year) which leads into “All In The Name Of” Terror Tera. All songs/intros in-between the first and last track are very well done. A cool mixture of mostly up-tempo material. Just the way I like it.

Some time has passed. I lost all track of these ‘aliens’. Sick N” Beautiful made a public appearence this past Saturday. The group put on a show. Sold merchandise and had a ‘tip jar’ for the band. a wonderful production. I hope they did well. Again…not leaving the Earth soon. A new label. Setting a new course. Sick N’ Beautiful left proof of what is now, and what is to become. I will catch them. One night…rockin’ hard. Sin City, its where I now make my home. A good place for ‘aliens’ to come and play.