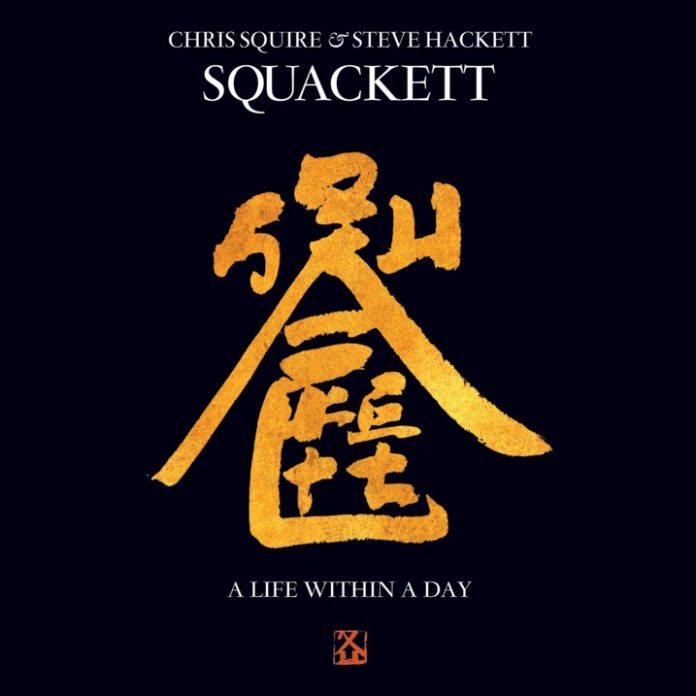 How about we start with a little background first?

The name Squackett. A witty combination of the artist’s two last names. It is a weird-sounding word. Always gets some kind of reply when said aloud. Imagine this if you will. Out of your home stereo speakers blast the debut CD from; Squackett. We’ll say for this exercise that the song playing is a little more on the prog rocking side; Storm Chaser. Three out of four times this is what the guest you just allowed into the house is going to say; “Is it ok if I use your bathroom? It was a long trip.” In which you will reply; “Of course. You know where it is.” On the way out of the toilet; “Hey, I like that music. Who is that?” If they spent any substantial time in the loo then they might have been able to hear more than one song. And really, that’s pretty much all it takes to realize just how good, and solid this CD is. Your reply to the inquiry; “Squackett.”

Chris Squire. Bass player for Yes. Steve Hackett. Ex-Guitar player for Genesis. Two seriously well-versed musicians. Both men now into their sixth decade of existence on this planet. Behind them such a phenomenal body of work that for the rest of their lives they could pretty much rest on their laurels, letting the praise continually roll in. Hopefully, the money as well for both being solid songwriters and main reasons why their respected bands became famous to start with. Experienced in all phases of the music business. Plus, both can also sing exceptionally well. Squire a choir boy from back in his youth.

My hopes for when it comes to buying any of these SUPER GROUPS releases are always guarded nowadays. In other words, I’ve been let down over the years. Musicians I genuinely liked, but whatever the project failing to generate from me, any sparks from within. I finally hear something I’ve been waiting for ages to hear, and I end up disappointed. Another twenty-dollar bill was wasted. It is easily explained. Most times the music just doesn’t click. It’s not what one was expecting. Maybe it’s in a style that is different than what I come to know the musician(s) for? Odds are I got turned onto their work playing rock music. So here they are putting out something new that is NOWHERE near the form or style of music I originally liked them for. Think Marilyn Manson putting out a polka record. This would be in the five dollar bin at Walmart in no time flat. A double edge sword here. Make music that keeps sounding alike, and fans will walk away because they think you are not capable of doing anything else. I’m happy to report that Squackett is on pretty solid ground.

As is the history of both musicians, the musical styling of this recording does change direction from time to time. That being the case and lots of times the winning formula to a successful album / CD. I find Squackett to be a true progressive rock release. Saying that I also find this to be a solid rock album. The main reason why I enjoy progressive music so much is that it incorporates different styles of music, yet centers them around a rock format. In a nutshell, it helps provide for a more unique listening experience than say just standard rock n’ roll. Squackett does just that.

The opening tune is also the title track off the CD; A Life Within A Day. One of the BEST new prog-rock songs that I heard in ages. What a welcome relief also. Both gentlemen let us know almost immediately that this is not old folk music. Carries over to the next song; Tall Ships. This has one of the most infectious bass lines you ever want to hear. Squire’s doing it !! Hackett is right out front giving the listeners something to wiggle their behinds too. Two outstanding songs, and on the first two tracks of their debut release. Three cheers — hip hip hooray. For the record, if one kept up with what Hackett / Squire have been doing while each contributing to each other’s solo projects, then one is not surprised by what they just heard.

The song ‘Divided Self’ follows. Somewhat mellower than the previous songs just played. Actually, to my ears, it sounds like a left-out song from the, Yes – Talk, recording sessions. Has that sort of feel about it. Not a derogatory statement. More a statement to the Yes West haters out there. Talk is one of my favorite Yes studio releases. It was the early material that made me a fan. Taste and opinion change as one becomes more mature. Came out at a right time in my life. Reminds me now whenever I play it of the time when my wife and I dated.

Track four is a Squire tune; ‘Aliens’. Much better than another sci-fi-themed song that comes to mind that also had Chris’ participation; Arriving UFO. Think Yes’ 1978 studio release; Tormato. Nowhere near being a favorite Yes song of mine. ‘Aliens’ on the other hand is an excellent song. It’s catchy. I caught myself walking around the house singing aloud the chorus; “Aliens are only us, are only us, from the future.” My cat, just looking at me all funny. You could only imagine what they are thinking while zeroed in on your behavior; “explain to me that one, Einstein. Are you referring to time travel? Where is my tuna dinner?” No…seriously…this is a groovy song. I can forget all about Arriving UFO with this one.

Sea Of Smiles I believe is set up to be the first single. It is an extremely solid, pleasant song. Displays superior musicianship. Has a marvelous beat. Rather positive. Excellent vocals. Like the whole CD, it’s examples of excellent producing and mixing skills. Makes me smile listening to it.

The Summer Backwards again displays the magnificent musicianship that one gets used to when playing recordings from either of these performers. Somewhat mellow. Nice pace to it. Again, excellent vocals.

The next song is contagious; Storm Chaser. Squire’s outstanding. As all his work is on here. It is so thrilling to hear Chris be able to stand out, and being heard is always appreciated. He is not one to turn down in the mix. Midpoint has the coolest sci-fi TV theme song thing going on you ever heard. Then back to being a badass rocker. Turn this up and be careful…you’ll blow your speakers out.

The CD ends on a high note. The last two tracks, Can’t Stop the Rain and Perfect Love Song; mellow (soft rock) alert — A nice blend from one song to the next. I’ll still pretty cool with the finished results. Really nice music!

Here are names of other contributing musicians associated with Squackett; Roger King – Keyboards. If a fan of Hackett’s solo material (which if not…you should be) then you know the name. Does excellent work. On Squackett, some of the best prog keyboard work I heard in a long time. The dude’s still in his 40’s too. Amanda Lehmann, guitar and vocals. A multi-instrumentalist if I’m not mistaken. Also, a driving force working previously with Hackett. And rounding out the group, drummer Jeremy Stacey. Has played with countless hugely popular acts over the years. On Squackett, he ranks right up there alongside a Bruford or a Collins. Can blend in, or lead the charge. Those ladies and gentlemen are the signs of knowing and identifying a brilliant drummer. Together these musicians mingle and complement each other’s styles. Would be exciting to get to see this in a concert setting. In a new interview with CRR’s Jon Kirkman, Chris Squire suggested that perhaps we’d see some live shows towards the end of the year. I hope so and guys…professionally record it and put me down for an advanced copy of the DVD. Look at that. Sold one already.

One out of five stars, Uncle G gives Squackett – A Life Within A Day, a rating of; 5 Stars! It is worth the effort getting it. My first time seeing this retail, the store wanted close to 25 bucks for it. Add sales tax. The walkout price would be close to 30 dollars. For the single CD, and not the one that comes with a bonus DVD. Because it is an import. More than I could afford, I passed. Next, I ordered it on a highly popular retail website that now adds sales tax to its final amount. A couple of days later I get an e-mail saying how sorry they are that they are sold out. Thank God for e-Bay. For without them, I could not have done this review.